The GLMRIS study area includes portions of the Great Lakes and Mississippi River basins that fall within the United States.

). This shared boundary is the primary concentration of the study.

) and the Great Lakes Basin (

Future ANS may transfer beyond the Detailed Study Area; this pattern was observed by the spread of zebra mussels, which originated in the Great Lakes and spread throughout the Mississippi River Basin. Therefore, the General Study Area encompasses the lower Mississippi, Missouri, Arkansas and Tennessee basins (

). While the majority of GLMRIS tasks were completed within the Detailed Study Area, USACE considered specific ANS impacts in the larger General Study Area. 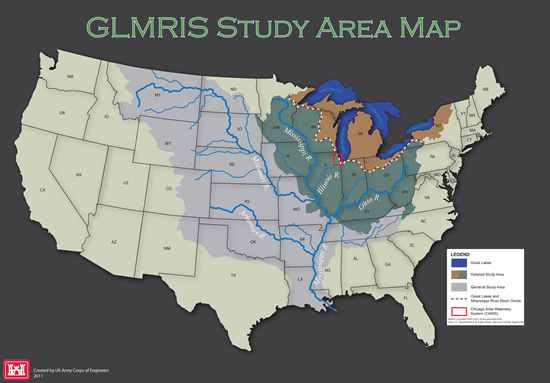 Focus Area 1, the Chicago Area Waterway System, as shown in the map below, is a continuous aquatic pathway between the Great Lakes and Mississippi River basins and, therefore, poses the greatest potential risk of aquatic nuisance species (ANS) transfer between the basins, via an aquatic pathway.

Focus Area 2 addresses remaining aquatic pathways. For this focus area, the U.S. Army Corps of Engineers completed a risk-characterization report that identified other potential aquatic pathways outside of the Chicago Area Waterway System, as well as included a screening-level assessment of potential ANS that may transfer via these connections. The Other Pathways Preliminary Risk Characterization Report is found on the Documents page of this website.

As shown on the Other Pathways map below, 18 potential aquatic pathways have been initially determined to pose a risk of ANS transfer. Eagle Marsh, located in Fort Wayne, Indiana was identified as having the highest potential risk of ANS transfer. The Indiana Department of Natural Resources has implemented interim measures to mitigate this risk, and USACE is further studying this pathway to determine whether a long-term ANS control should be implemented. For the remaining 17 sites, USACE is coordinating further study to finalize the risk characterization and determine whether ANS controls are recommended.

Sign up to receive email updates regarding the GLMRIS Study.